MedShare Reunion Celebrates the Little Hospital that Could

This year, 2016 is a special Medshare reunion for Hospitalito Atilan in Santiago Atilan in Guatemala. Ten years ago, 2006, Medshare then Board Chair Pat Robinson, Bonnie O’Neill, Diana Blank and then CEO A.B. Short visited the hospital on Medshare’s first mission trip.

The hospital dates back to 1964 when it was constructed after a measles epidemic
killed over 600 Mayan children. Over the years, the area had been plagued by civil war violence and finally the the natural disastrous mudslide that destroyed the hospital.
At the time of their visit, the hospital was located in a six-bed hiker’s shack with a makeshift operating room.

The Medshare team was determined to help in the goal of a hospital serving the 75,000
Maya living in the area. The result is a joy to behold. The facility provides preventative clinical health services with emphasis on women and children and the only emergency and surgical care in the area.

The following entry is from Richard Higgins, a retired college professor and administrator; he is also co-founder of Mundito Foundation.

The 30-year Guatemalan Civil War was over. In Santiago on Lake Atitlan, a team of local residents, including some expatriates, decided to revive the local health clinic. The clinic had been abandoned during the war after the army built a base next door, and the Mayans (the army’s main targets) no longer dared come to the clinic. After several years of hard work, Hospitalito Atitlan was open for business, and patients flocked in. 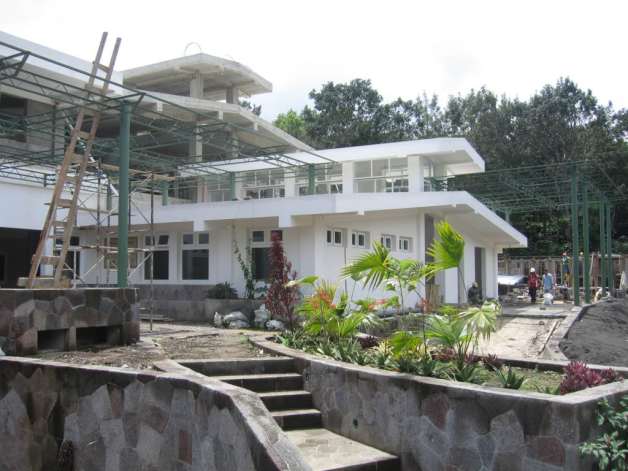 Tragically, six months later the hospital was inundated by a mud slide following a landmark hurricane. Several hundred homes were destroyed and more than 200 lives were lost in the village.

What to do next? Rebuild. This is a resilient community. The expatriates and Guatemalan residents campaigned for private money from friends and foundations. A gifted architect designed an eco-friendly building that generates its own (solar) electricity and uses natural convection for cooling.

Five years later, the new Hospitalito Atitlan was again open for business, and patients come in large numbers from an increasingly wide area around and above the lake. In this volcanic area, living and transport take place on steep slopes, so a local health clinic is a huge asset.

One year after the 2010 opening of the new facility, our donors at the Mundito Foundation raised $25,000 for ‪MedShare‬ to pay for shipping and logistics for a container of medical supplies to Hospitalito Atitlan. I was delighted to visit five years after the Mundito-funded container shipped. Hospitalito Atitlan is a fine facility, with clean well-equipped examining rooms. Dozens of patients and families wait their turn patiently in the halls.

The local staff is professional, competent, and caring. A team of doctors from University of Pennsylvania was visiting for several weeks. I now understand the phrase “medical mission.” Doctors sacrifice their time and income to fly in with crates of medical supplies at their own expense. They perform procedures on patients and collaborate with local doctors to enhance local expertise. Now that is a mission.

Ten years ago when my wife and I last visited Guatemala, the Mayans living in the highlands did not seem well integrated into the mainstream. This time I found Mayans increasingly in positions of responsibility.

Here is an example from Hospitalito Atitlan:
Visiting the analysis lab (sparkling clean with modern equipment), we waved at the director, who was busy with a procedure. He began working there as a security guard. One busy day, a lab technician asked him if he could help them read and record simple test strips – pregnancy, diabetes, etc. He did it so well that later they asked him to help look into the microscope at stool samples and identify ones with amoebic infections. He did it well. Several promotions later, he is director of the analysis lab.

Guatemala deserves our concern and financial assistance:
The (non-government organization) NGOs and private donations help circumvent issues of government inefficiency and corruption. The local communities have the will and energy to do good things with our help.

A site visit is an excellent way to evaluate how an NGO like MedShare makes good use of our contributions. I observed MedShare’s strong on-the-ground partners, who help speed containers of medical supplies through customs and bureaucracy.

As a result, partners in the local medical facilities can help the sick with first class supplies and equipment. Doctors were overjoyed to receive an ultrasound machine, a diagnostic treasure in Guatemala. Little things also count. A doctor said it well: “A suture for stitching a wound costs a few dollars in the USA. For us, it can mean that a life will be saved.”

People: The Heartbeat Of A Heartfelt Mission

The following entry is from Vele Keyta Redding, an award-winning entrepreneur, journalist, media professional and author.

I really didn’t know what to expect before embarking on this MedShare journey through Guatemala, but I asked God to open the eyes of my heart so that I’d see what He wanted me to see.

What I see are People — people with joy, hope, heartfelt gratitude and commitment. It was a constant on every path taken. No matter the plight or struggle, the light and strength of joy on the faces of the people I encountered  shines brightly here. Whether through a doctor, who has  made it a life mission to do good or a child whose face lit up as our eyes locked and shared a greeting or smile, the preciousness and value of life alone triumphed.

I could see joy, in all it’s subtleness, rising to create a sense of hope and an anticipation for good. Every effort made by MedShare and all of its partners to make life better for our Guatemalan neighbors is cause for optimism. From the Guatemalans’ evident belief that good is prevailing, emerges genuine gratitude — a gratefulness that resounds every time the word “Graciás” or “Thank you” is uttered for every box of medical supplies, every gurney or medical machine that arrives just in time to save a life or prevent a medical condition.

It’s a special calling, this mission to truly be our neighbors’ keeper. It takes commitment and MedShare and all of its collaborators are dedicated to the cause. All throughout our journey, life-changing and humbling stories could be heard. In all of them, the commonality is the heartbeat of and love for the People.

So, when a young hospital administrator ended her talk, saying “Thank you for seeing us through the eyes of your heart,” I knew that God had answered my prayer and I had seen what He wanted me to see.

On March 6, 18 MedShare Board members and other donors traveled to Guatemala to learn, first hand, how MedShare helps resolve critical healthcare needs in the developing world.

Travelers started in Guatemala City with a tour of the only pediatric hospital in the country. There were about 200 patients sitting in the waiting areas; no one is turned away. When we later saw MedShare products in the warehouse, it was even more gratifying to have seen who they were helping.

The following update is from Dr. Carl Kihm, a podiatrist who leads regular medical mission teams in Nepal.

For decades, the poor of Guatemala City have been drawn to the city’s gigantic dump for a treasure hunt. Collecting reusable and recyclable materials (such as copper, glass, plastics and cardboard) does not necessarily yield great profits. A long but successful 11-hour day at the dump might yield $2-3 depending on your finds and the market. It’s hard to believe that these earnings are still above the daily international poverty line of $1.90/day… And many other people have it worse.
Unfortunately, many of these impoverished men and women are illiterate, have no education and many are tied into gangs and drug use. The residents in/around the dump are not used to the too-easily and far-too-often forgotten blessings we experience in the US. They are not guaranteed healthcare, electricity, running water, an education or government assistance. The poor residents live hard lives and they do not have other great paths to choose from.

In walking through the dump, their safety is often jeopardized in various ways – inhalation of methane gases, exposure to disease-ridden waste, a crushing collapse of the landfill, and even dangerous gang control of the arriving dump truck loads.

My guilty mind turns to self-reflection and realization of my own biologic footprint as the dump’s pungent smell swallows my breath, and with a choke, I return to the moment. In viewing the dump from afar, soaring vultures impress upon me the length of their 32-acre dump territory. As I watch them, movement below shifts my eye to the human, land vultures welcoming a continued supply of incoming dump trucks.
—-
In 1997, Hanley Denning, a woman from Maine, volunteered to teach children and adults in this area. In doing so, she was immersing herself in this culture and becoming more fluent in speaking Spanish. Her purpose in Guatemala, and in life, changed when she learned of their struggles and the problems the dump created. You see, while the adults went to the dump, their children were left to the streets.

Hanley sold her belongings to fund an organization called Safe Passage (in Spanish, “Camino Seguro”) to take in and tutor these children. Unfortunately, years later, Hanley was in a fatal car accident. Her improved and ever-evolving organization thrives. On today’s tour, I could tell that Hanley’s spirit and vision lives through the guides, workers and students. Hanley would be extremely proud and overjoyed, but not finished.

The public Guatemalan City Schools are not very good and Safe Passage noted a continued poor graduation and literacy rate among their initial participants. Instead of solely tutoring, the organization then started their own school to properly teach these children. They also found that good nutrition is necessary to learn well. Safe Passage now provides their students several meals a day. They continue to teach children and also their willing parents. This equips them with a new found self respect and better ability to sustain and foster their families.

In association with Safe Passage, the adult women students sell handmade jewelry made from recycled dump metals and papers. Their group, called Creamos, raises funds for these women directly. In supporting their efforts you not only get a fashionable necklace with a great story but also you provide them a continued education and a family’s path to a better life.

MedShare
Create a free website or blog at WordPress.com.